Reprinted with permission from the Montecito Journal

The Future of Montecito
Some three dozen community leaders and concerned citizens have responded
to bobhazard@gmail.com to share their ideas of what they love about
Montecito and what they think might be improved. That‚Äôs a very solid
beginning to an issue-oriented conversation. Keep those e-mails coming and we
will take one issue each week and explore it, while trying to include as many
views as possible on each.

As a kickoff, an e-mail from Dana Newquist is shown below in its entirety.
Dana has been a recognized leader in Montecito for the last 30 years. There is
hardly an issue he has not addressed in his long tenure as a former Director of the
Montecito Association. He is a founder (along with Diane Pannkuk) and ardent
supporter of the Montecito Village Fourth (of July) parade and celebration, and is
a former member of the Board of the Montecito Fire Protection District.

What follows are his comments on the future of Montecito:
‚ÄúBefore I moved to this ‚ÄėPromised Land‚Äô of Montecito, I had a small chain of
five computer stores called Computer Village. I got an offer to sell my chain in
1985 and decided to take it. The sale gave me the money to buy in Montecito.
I knew the rural character of Montecito, but had no knowledge of the people.
‚ÄúBeing one of seven children, and the son of an entrepreneur from Chicago, I
wanted to get involved in the community, so I opened Montecito Video in 1986.
Charles Borgatello had a space available in the Upper Village, so I leased it!
Within a year, I became President of our Merchants‚Äô Association. My learning
curve on our local community was straight up and I was loving it.

‚ÄúWhy am I giving all this background? I have lived in Chicago and its suburbs,
Riverside, Monterey, San Antonio, San Francisco, Boston, and finally
Santa Barbara-Goleta. There is nothing, in my opinion, that comes close to
Montecito. Why?

What‚Äôs Great about Montecito?
‚ÄúIt is not just the rural feeling with open space, not the lack of street lights
every 50 yards, not the lack of sidewalks, not the scenic stance of the Santa
Ynez Mountains as a backdrop, not the Channel Islands as stepping stones to
the beautiful Pacific. It‚Äôs also the people who live here now and who have come
before us. In an attempt to protect this very special place, they developed the
‚ÄúCommunity Plan‚ÄĚ that defines this community.

‚ÄúThe Montecito Community Plan is a preserve-and-protect plan, administered
by the Montecito Planning Commission, the Montecito Board of Architectural
Review and the Montecito Association. Montecito is not incorporated; it has
neither a mayor nor a town council. Hopefully, that will never be. When you
introduce local government, you lose independence. We have too much government
already.

Community Service
‚ÄúThankfully, many honorable men and women have unselfishly toiled in
volunteerism to defend our semi-rural haven. Serving for six years on the
Montecito Association Board gave me the tools and experience to help adjudicate
many issues our hamlet has faced over the past 30 years of my tenure.

Threats to Montecito
‚ÄúTime changes almost everything. With time, people also change; their opinions,
needs, and associations change. One of the many reasons government
grows is that it is driven by regulatory mandates whereupon elected leaders
tell everyone else how to live. Expensive regulatory mandates have become a
big deterrent to business success and an irritant to those seeking permission to
remodel, but they also protect a community‚Äôs character.
‚ÄúThe Montecito Association can‚Äôt negate what‚Äôs already ‚Äėon the books‚Äô but it
can and does influence current and future development. ‚ÄėCommunity Coalition
Alternative Plan for 101‚Äô is one example.

Opportunities: Get Involved
‚ÄúWhat would I change if I could wave a magic wand? Having sat on several
civic and non-profit boards, I have experienced that the 20% rule always holds:
20% do all the work. In Montecito, with respect to its residents, even with all the
treasured amenities, that rule changes. Perhaps 10% of the population, or less,
do all the work. Seems odd? This is such a magical place that a large percentage
of our citizens use this as a second home and reside elsewhere. That puts
additional pressure on full-time residents. With that, a plea! Help protect our
haven. Get involved. There are a multitude of tasks that can suit your talents.
Just do it!‚ÄĚ ‚ÄĘMJ 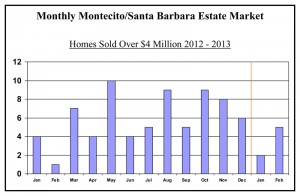 Number of Homes Sold in Montecito and Santa Barbara, California
The First 3-Months of Each Year From 2000 to 2013

Between $4 Million and $8 Million 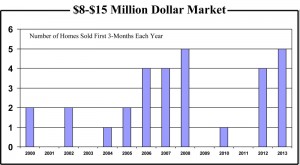 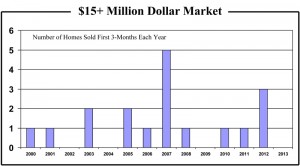 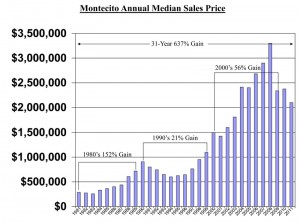 Montecito and Santa Barbara, California Homes¬†Sold
Over $4 Million from 2000 to 2011 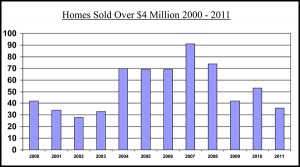 Montecito and Santa Barbara, California Homes Sold
Between $4 Million and $8 Million from 2010 to 2011

Montecito and Santa Barbara, California Homes Now Available
Between $4 Million and $8 Million in 2011

Montecito and Santa Barbara, California Homes Sold
Over $8 Million from 2000 to 2011 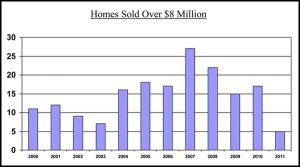 Montecito and Santa Barbara, California Homes Sold
Over $8 Million from 2010 to 2011