Once This Was HOLLYWOOD(By Sally Cappon;Reprinted with permission from Santa Barbara News-Press)

Santa Barbara saw its heyday as part of film industry with Flying A Studio on Mission Street. Six steps lead up to the cream-colored, unpretentious building at the comer of Mission and Chapala streets. 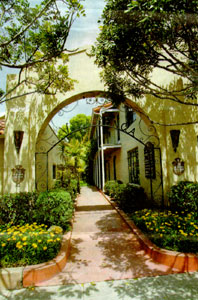 The arch was a gateway into the Flying A Studio before it went bankrupt.

To thousands of motorists who go by the intersection daily, the building looks like many turn-of-the-century structures, slightly fading dowagers on the edge of downtown. A keen observer might note intriguing architectural features: arches, interesting windows, a wood gate that hints of mysteries within.

Once this was Hollywood - the Wild West, melodramas, social comedies and sci-fi fiction rolled in one. The corner building - once the traditional Green Room where actors waited to go on stage, is the last still-pure remnant of the famous Flying A Studio when Santa Barbara was in the vanguard of the motion picture industry.

Santa Barbara's heyday as Hollywood-North was brief, from about 1913 to 1917. But in that time, stars of the silent screen, future powerhouse directors and luxury automobiles rolled into the sprawling studio in the block embraced by today's State, Mission, Chapala and Padre streets.

Flash to today. The film industry went south. The American Film Co. (a winged logo gave the Flying A its nickname) went bankrupt Most buildings were razed in the 1940s except the Green Room and a one-time garage facing Chapala. The block became an unofficial demarcation line between commerce and a predominantly residential area. Small businesses and professional offices today line the Mission Street half of the block while homes largely occupy the Padre Street side. Two large churches rise above.

Enter Peter Becker, architect Tall, friendly, a UCSB grad who studied architecture in Colorado and now principally designs homes, he bought the corner building and moved in the first of this year. 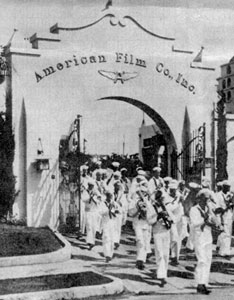 A band marches through the arch which bears the name of American Film Co. Inc. which owned the studio.

The old Green Room is now his office. On a recent morning, sunlight streamed through three arched windows as architect Valeri Schillberg worked on drawings in the bright room. A sheltie named Sam greeted guests at the door.

For over 60 years, from the days of the Flying A to last year, this building had another identity. It was where the Adams family ran a furniture caning business and where Arleigh Adams caned until he was well into his 90s Passers-by remember his mother sitting at a window, caning.

"Everyone who ever needed anything earned came here," Becker said.

The Adamses lived in converted dressing and makeup rooms at the rear of the building where Arleigh would "invite -people in and give them a tour." As a one-time child actor at the Flying A, he had "an unusual reverence" for the legacy, Becker said.

Becker knew of the Flying A from his college days at UCSB. Even before going to architecture school, "I loved Santa Barbara history," he said. "One of the people I read was Walker Tompkins. This is one of the places he talked about.

"They say this was the largest and most well-equipped movie studio in the world," he said.

While the reign was brief, "They did do 'Perils of Pauline' here. "Mary Pickford was here," he added. Also, "Mary Miles Minter was the star of the silent films." 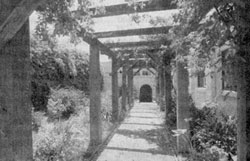 Among directors, Victor Fleming, who went on to direct "Gone with the Wind" and "Wizard of Oz," worked at the Flying A, according to an exhibiton the city's early movie history at the Santa Barbara Historical Museum. Barriers were broken at the Flying A. The 1916 film "Purity," featured the first nude scene.

The movie industry had come to California from the East for climate and a variety of locations - Western settings, sand dunes, desert islands, elegant mansions. But ultimately, "You couldn't have two Hollywoods," said Becker. The Flying A also had internal business problems and in 1920, the studio built on an old cow pasture closed down.

For years buildings lay idle, though Becker heard there was a USO dance hall here in World War II.

When he learned the old Green Room building was for sale by a contractor who, had bought it from Arleigh Adams, who is now in a retirement home, Becker said, "I was thrilled. I came here the next day."

"It's an excellent rendition of Mission Revival architecture," he said of the building, noting the original architect "did a good job." Round arches, he pointed out "are like the Mission."

The interior reflected the other major style of the early 1900s. "It couldn't be more authentic Craftsman," he said. The office has a brick fireplace with wood mantel, dark wood wainscoting, coffered ceilings. Since the Adamses made few modern upgrades, many original features remain, including lighting and Craftsman type lanterns.

But Becker, whose office was then in woodsy Montecito, also realized he'd been naive. There was a downside: Noise. With the building built close to two main streets, "It's a noisy little corner," he said.

Offsetting that through the gate behind a wall is a garden with the original Flying A pergola and roses believed to date from 1913.

Underneath is a red concrete walkway scored to look like tiles. "It's just like Mexico or Spain," he said. "The Spanish put a wall against the street with a secret garden behind. In Mexico you open up a gate to a little garden of Eden."

Still, it took fellow architect Schillberg, a board member of the Sustainability Project which advocates "mixed use" in Santa Barbara, plus a small act of God, to seal the deal for Becker who likes to live and work in the same place. 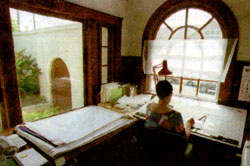 Architect Valeri Schillberg works in the offices that are in one of the Flying A Studio's remaining structures.

"Valeri convinced me I could take care of the noise," said Becker. As they toured the building, an off-season thunderstorm struck flashing and reverberating through a skylight which the original builders had put in. ("They were masters at lighting," Becker says with awe.) The dramatic event, like a Shakespeare play, seemed momentous.

Now in his new home-office, Becker works closely with historic preservationists including the Pearl Chase Society and city Historic Landmarks Commission. He wants to duplicate a tiny scrap of pale green paint he found beneath other paint layers which may be the original color of the old Green Room.

Society and city Historic Landmarks Commission. He wants to duplicate a tiny scrap of pale green paint he found beneath other paint layers which may be the original color of the old Green Room.

As he and Sam walk around the neighborhood, he sees more hints of Flying A days. Judging by a sidewalk logo of a fish identical to one etched in concrete at his front door, he speculates a large arch facing Mission Street may be the original Flying A main entrance. Architectural details suggest a back wing of another building may be original. So may lanterns found elsewhere.